Is Yo-Yo Dieting Hazardous to Your Health? 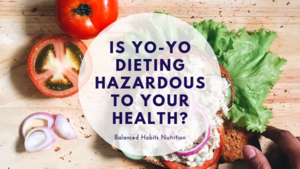 The definition of yo-yo dieting is "repeated losses and regains of body weight."

Initially: You go on a low calorie diet of say 1,000 calories a day.
Then: Your body then goes into what's called famine mode. Famine mode is when your body thinks it's starving so it adjusts by slowing down your metabolism. It conserves fat and begins to burn muscle instead (which means you'll burn fewer calories and lose less weight.)
Next: After a while 1,000 calories per day becomes more difficult to maintain. Hunger, fatigue and even depression may occur.
Eventually: You go back to your old eating habits. Anything over your 1,000 calorie a day intake results in you gaining weight.
Sadly: You’re right back where you started (or possibly even heavier) so you go back to step one and start all over again.

Can you relate even a little bit to the above?

There's a good chance you can as it's estimated that, at any given time, approximately 108 million Americans are trying to lose weight and 71% of Canadians have tried to lose weight at one point or another. What's more, the typical dieter attempts to lose weight four times each year.

We’ve put together five reasons you should avoid yo-yo dieting at all costs.

1. Increases the stress hormone - When you go on a low calorie diet, your body emits more of the stress hormone cortisol. Elevated cortisol levels: interfere with learning and memory, lower immune function and bone density, increase weight gain, blood pressure, cholesterol, heart disease... The list goes on and on.

2. Boosts up the level of other hormones - Repeated crash dieting increases metabolic hormones, such as insulin, and elevates levels of sex hormones, including estrogen. These changes cause you to start putting on weight around your middle, which research has linked to insulin resistance, diabetes, high blood pressure, and heart disease.

4. Could damage your heart - Women who weight-cycle five times or more during their lifetime may be damaging their hearts in the process according to a study published in Clinical Cardiology.

5. It could damage your immune system - A study that found that women who repeatedly lost and gained weight had lower immune function, particularly lower counts of natural killer cells. Women who had yo-yo dieted more than five times had a reduction by one third of their natural killer-cell activity.

Regular exercise is key. As is what you eat of course. For years we've been told that "diets don't work. "It's true, they don't. While you may lose weight, chances are you'll gain it all back (and possibly more) once you revert back to your old way of eating.

The key is not to diet, but to change your day to day eating habits for life.

A proper Balanced Habits FÜducation™ is the key. You must learn to eat healthy in a way that is sustainable for life. This means taking a balanced macronutrient approach to what you eat so that you can once and for all make yo-yo dieting a thing of the past.